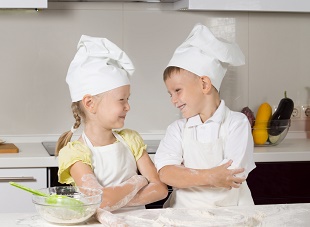 Do you joke around that you’re a “terrible cook” while chowing down on yet another carton of Chinese food? Do you always say you should learn how to cook but just don’t have the time?

If you’ve never been taught, building a cooking habit can seem pretty daunting. I know this because I used to struggle in the kitchen too. I spent most of my life surviving on turkey and mayo sandwiches, frozen pizza, and restaurant meals. When I could build up enough motivation to cook something, I’d just boil pasta.

In hindsight, the excuses I employed seem ridiculous, but I remember how difficult (and frustrating) it was to want to make a lifestyle change, but lack the know-how to do so. Eventually, through years of trial and error, I figured out how to change my habits.

HOW TO DITCH THE EXCUSES AND LEARN TO COOK

The first step in building a sustainable cooking habit is to address your challenges head on and come up with rational solutions. Here are some of the most common reasons people say they can’t cook, and tips to overcome each one.

The Excuse: I Don’t Have Time

This popular excuse is p

retty powerful, and we use this rationale to avoid much more than cooking. To overcome this block, the most important thing that’s needed is a shift in mindset.
“Not having time” is just a matter of priorities. If learning how to cook isn’t a priority for you, then you’re doomed, regardless of effort. If cooking is important to you, you can make time by shifting around other activities. For example, before I learned how to cook, I’d get home from work each night and watch TV. When I said I didn’t have time to make dinner, I really meant that I’d rather watch another episode of It’s Always Sunny in Philadelphia than cook. Tackle this block with the following steps:

1. Write it down. Start by recording what you do every day when you get home, along with a rough estimate of how much time you spend doing each activity. Don’t leave anything out. Do you go out for drinks with friends? Watch TV? Play games on your phone? Write everything down.

2. Prioritize. Next, look at each item on the list and think about whether or not it’s more important to you than cooking yourself a healthy meal. Maybe you can cut 30 minutes out of watching TV or cut out Angry Bird completely. Find the time.

3. Try it out. Commit to a one-week trial in which you swap in cooking activities for the time you would have spent doing a task of lesser importance. Once that week is over, commit to another week—and so on.

Here follows a list with some basic and very important vocabulary concerning cooking.
Bake – To cook in an oven.

Barbecue – To cook on a grill over a charcoal or seasoned wood fire usually with a tomato based sauce. Customarily outside.

Beat – Combine vigorously with the intent to force air into the mixture.

Blend – Mix together gently until the consistency is the same throughout.

Braise – Cook over an open flame with the flame touching the food.

Bread – To dip or roll food in a liquid and then breadcrumbs until covered.

Broil – To cook with the heat source above the food.

Brown- Cook only until there is a light brown color.

Cut in – Mix together gently with the edge of the mixing tool.

Deep-fry – With enough oil to cover the food.

Fold in – Mix together gently with the flat of the mixing tool.

Form – Mold into a certain shape.

Grate – To use a grater to shred food. (Usually vegetables or cheese)

Marinate – Soak (especially meat) in a spiced liquid. Usually but not always overnight.

Pan fry – With just enough oil to keep the food from sticking.

Pare – To remove the peel.

Pureé – Reduce to a watery consistency.

Roast – Cook in a covered pot either on the stove or in the oven.

Sauté – Cook in a small amount of oil until browned.

Scald – To pour hot water over something or dip it in the water.

Sear – To drop food (usually meat) in a very hot pan to seal in juices.

Separate (eggs) – Remove the egg yolk from the albumen.

Simmer – Cook over a low flame.

Steep – To let sit in hot water. (For example tea)

Stew – A very thick soup with a flour base.

Toss – To gently mix a salad.

Whip – Beat rapidly to force air into a mixture.

Whip up (something) – Informal term for preparing a quick meal.